Team Top Table only formed in December after we met on Yammer, so we were shocked to win Tesco Hackathon 2015. We set up our own private Yammer group in the months ahead of the event, and had been developing the idea and business case ever since. Although some of us had met as individuals and as a small group, our first meeting as a five-member team was on the morning of the Hackathon. 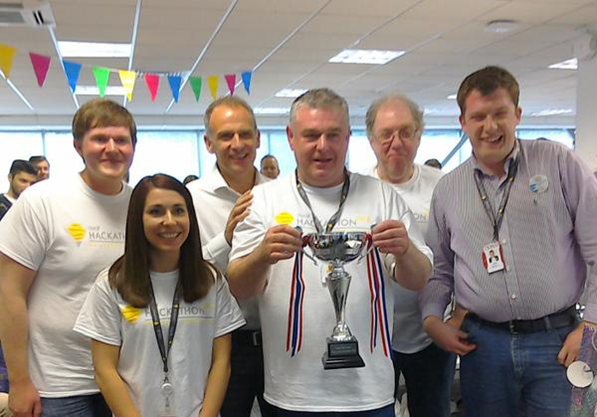 Even though we’d never met in person, we felt as if we knew each other well already. I was really pleased at how quickly the team bonded and how quickly the conversation started flowing. Our team was made up of me, Justin Boyd from Belfast, Marketing Graduate Mari Saona, my Chesterfield colleague James Dietsch and Gerry Gaughan from Goole DC, who was the oldest hacker taking part.

A tip I was given last year (when I won with a previous team) was not to rush into anything. We gathered in a circle and discussed what we’d like to get across in our three-minute pitch to the judges, before designing a full set of screen layouts and graphics over a working lunch. After a very amicable agreement on who was going to do what, we started on our build at the 90-minute point.

Our hack was based around an idea that enhanced the customer experience in Tesco's in-store cafe's and restaurants.

We were distracted late in the afternoon by a musical jingle in the car park, although it was a welcome interruption. An ice cream van had been booked (thanks to (x)Matters). Our team showed it was full of energy as we hit the front of the queue – it felt great to get away from our laptops and stretch our legs. After our afternoon treat, we continued to hack away and it was time for file sharing.

Our three designers – James, Gerry and Mari – were sending their work over to replace the temporary buttons and the text was soon being replaced by great images. It was all taking shape. Everyone was pleased with how the graphics looked in the apps and it was at this point that there was the first time a real sense of achievement flowed through the team.

One of the great things about Hackathons is meeting new people, so when our evening meal arrived in the shape of a gourmet street truck, we gladly took advantage of the fine weather and stood around in the open air chatting among the different teams. Although our hack contained three apps and two cloud databases, one app was significantly more important than the others. This app had two main features and at the nine-hour point, we had one of the features fully functional. There was a great sense of elation and we decided to break out into the foyer. I can’t remember what we talked about but it must have been interesting, as we returned to our desks 45 minutes later.

By the 15-hour mark, all that was left to do was to link everything together and finish the parts of the apps that had to be done afterwards. We set ourselves a target of finishing by breakfast time, but didn’t take into account how much sleep deprivation would take its toll on us and only completed the full hack with one-and-a-half hours remaining. Next up was the pitch. And as we practiced, it became clear there’d be a few ‘it’ll be alright on the night’ moments, as we all became aware that things could easily go wrong. Fortunately there weren’t any hitches and our presentation to the judges was flawless.

Because we were all amateurs, we had the most to learn and decided that with our diverse backgrounds, our best chance of a trophy would be the Collaboration Cup. But when that award was quite rightly awarded to the Unnamed Six, we looked at each other in disappointment, expecting to be going home empty handed. When we were announced as the overall winner, the sense of achievement the team felt was multiplied by the fact that we didn’t expect to win.

Despite the lack of sleep, I loved the Hackathon experience and hope to be back next year when I try to make it three in a row!